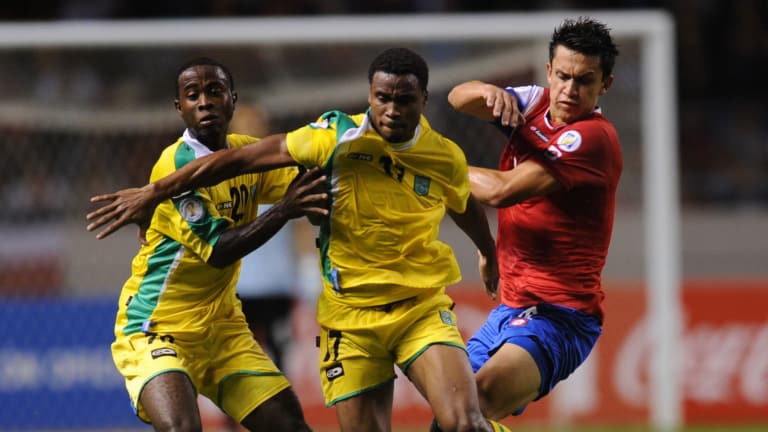 Coaching has always been in the DNA of Vurlon Mills, and his love of football has seen him transition from one of the best midfielders of his generation to one of the brightest up and coming youth coaches in Guyana.

Mills who earlier this year retired from international duty with the Guyana senior Men’s National Team, the Golden Jaguars, is now firmly focused on his coaching career and the development of his charges.

The 592 Dugout  recently caught up with ‘GQ’, a nickname he earned through his silky touch in midfield and he opened up on his journey thus far in the coaching arena.

“After a full career on the national team, what lies ahead is my coaching career, I’m focusing on building my academy program, on furthering my education in coaching. I’m inspired to be one of Guyana’s best youth coaches, both nationally and for my academy”.

The academy that he spoke of is the ‘Vurlon Mills Football Academy’ which has been in existence since February 1, 2018.

Mills who is big on youth development and is also the Guyana Football Federation’s (GFF) Technical Development Officer  revealed; “The main aim for the programme is to develop future national players. I want to design for the academy, a curriculum that will develop athletes to be a part of a national programme, not just to compete locally, but athletes who can represent Guyana, athletes who can earn themselves scholarships abroad, athletes who are better equipped to represent themselves whether they are chosen for national duties or at overseas colleges, athletes who are disciplined and well rounded, who play good football and are academically inclined as well”.

“The Vurlon Mills Football Academy cannot do it alone. I’m hoping for the new season, we will be able to sign one or two  sponsors who can help us with this vision”.

Looking back on his entry into coaching, Mills explained that it has always been part of his DNA; “One of my strong points has always been trying to help players who I was playing with, coaching has always been a part of me in that aspect, even as a young player, at aged 15-16, if one of my teammates wasn’t getting it right I would stay back after practice to work with him. We tried to help each other become better players, even at Slingerz (FC), in Trinidad (San Juan Jabloteh FC, T&TEC FC) , my former teammates can attest to that fact”.

“We would compete, not to be better than each other, but to improve each other, on game day we would try to see who would score the most goals, make the most passes and that sort of thing. In practice we would test each other, coaching has always been a part of me, that’s why I think I got into coaching, my love of teaching and improving others”.

One of the advantages that Mills has under his belt that will bolster his abilities as a coach is his experience as a professional footballer.

“My experience in playing will be a big factor in my coaching career, players react more to coaches who can run, demonstrate and explain themselves, moreso a coach who has played at that level (international), because I can now share that experience and they would enjoy that. I think my playing career will play a big part in my coaching career and it will help me throughout, not just because players would enjoy playing under a former international player but also because I understand how the training works, in terms of workloads, muscle reactions, in terms of how players would operate, as a former player I would also be a better judge of how to best develop my players”.

The sky’s the limit for GQ and he has already set his eyes on bettering himself. He revealed; “My ambition as a coach is to further my education, I want to always keep evolving, become a better coach, to adapt to new methodologies and new teachings, to understand my players and to have my players understand me. I’m currently equipped with a CONCACAF C Licence, that’s the highest form of licence that I have, I want to go on to attain my A Licence. I don’t want to be limited to being a coach, I want to learn the medical aspect of it as well, the sports science that is included in coaching”.

Being one-dimensional is not on the cards when it comes to his coaching style, says Mills; “I want to be an allround coach, to help my players holistically, not just technically, but also mentally, socially and academically”.

Most importantly Mills left a message for aspiring footballers; “What i want to say to the youths, who might be coming through the ranks and might be pondering a future outside of football is to stay in school, education is key, without education football doesn’t matter. You can be the best footballer but once you’re not educated, it is difficult to represent yourself at a national and international level, in earning yourself a scholarship”.

“It also helps you to think faster when you’re on the field, coaches like smart players who understand tactics and can play. I would also encourage youths if they really want to be a part of football, to not only be a footballer but to further yourself in learning the physiological part of it, the sports science aspect, football has so many jobs available for young people today and it is up to us to equip ourselves to be a part of the sport. Our lives as footballers is a short span and again it is up to us to make it lifelong by equipping ourselves properly as players”.